Posted on May 14, 2015 by davidhendersonphotographer 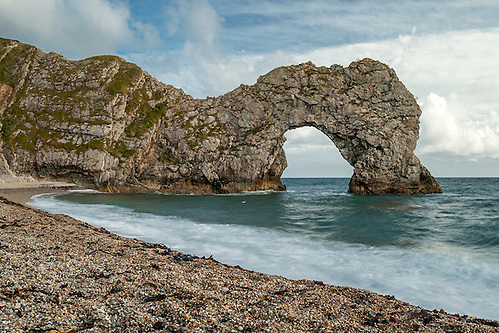 Durdle Door is a natural limestone arch on the Jurassic Coast near Lulworth in Dorset, England. It is one of the most photographed landmarks along the Jurassic Coast. This rock arch in the sea was formed as a result of the softer rocks being eroded away behind the hard limestones, allowing the sea to punch through them. The name Durdle is derived from an Old English word ‘thirl’ meaning bore or drill. Eventually the arch will collapse to leave a sea stack.

Scenes from the 1967 film of Thomas Hardy’s novel ‘Far From the Madding Crowd’ were filmed at Durdle Door, and in 1997 it was used as a location for the film ‘Wilde’ starring Stephen Fry.

The promotional video for Cliff Richards’ 1990 hit ‘Saviour’s Day’was shot here, which saw Cliff singing both down on the beach and on the clifftop. Later, Tears for Fears shot parts of their video to promote ‘Shout’ at the iconic arch.

This entry was posted in Landscape. Bookmark the permalink.