Posted on September 25, 2015 by davidhendersonphotographer 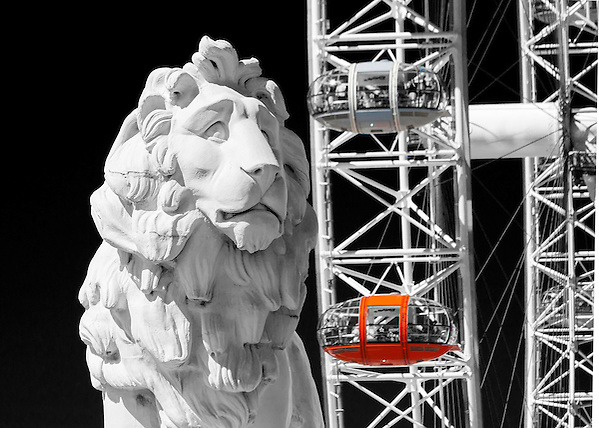 The South Bank Lion is a Coade stone sculpture of a standing male lion cast in 1837. It has stood at the east end of Westminster Bridge in London  beside County Hall, since 1966.

The statue is about 13 feet (4.0 m) long and 12 feet (3.7 m) high, and weighs about 13 tonnes (14 tons). It is made of Coade stone, a type of ceramic stoneware that resembles artificial stone and which is very resistant to weathering.

The lion was originally mounted on the parapet of James Goding’s Lion Brewery on the Lambeth bank of the River Thames; Hungerford Bridge spanned the Thames nearby from 1845. The Lion Brewery closed in 1924 and the building was demolished in 1949, to make way for construction of the Royal Festival Hall as part of the Festival of Britain. The lion was removed, revealing the initials of the sculptor William Frederick Woodington and the date, 24 May 1837, under one of its paws. It was painted red as the symbol of British Rail, and mounted on high plinth beside the entrance to the Festival of Britain near Waterloo station.

The statue was removed from outside Waterloo station in 1966 to allow the station to be extended. The red paint was removed, and the statue was moved to its current location on a large granite plinth beside Westminster Bridge. The plinth bears the inscription “The South Bank Lion”. The statue was given a Grade II listing by English Heritage in 1981.

A second, similar Coade stone lion was removed from the Lion Brewery when it was demolished. Painted gold, it is now located above the central pillar of the Rowland Hill Memorial Gate  to the west of Twickenham Stadium.